Phase diagrams for several binary salt solutions are shown below. Click on the tabs to see solubility diagrams for:

In the sodium chloride – water system, one eutectic point and one peritectic point is found. These points are shown in the phase diagram to the right.

The eutectic point is the cryohydratic point, where ice and NaCl·2H2O (hydrohalite) both are in equilibrium with the same saturated solution. 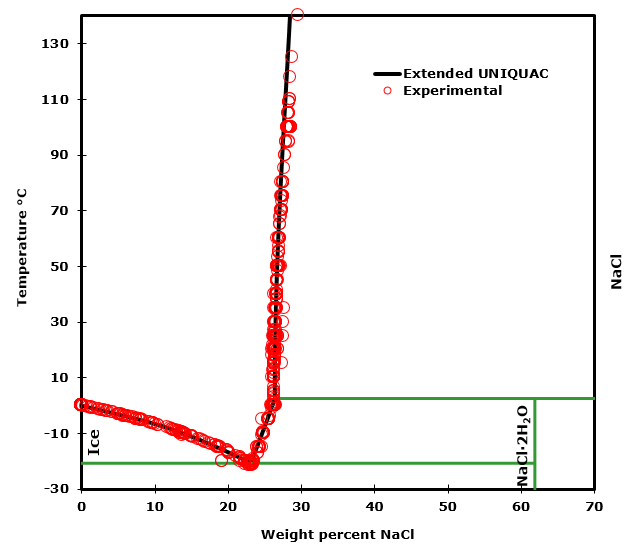 Phase diagram for the NaCl – H2O system including an ice branch, a hydrohalite branch and a branch representing the solubility of anhydrous sodium chloride.

Pure water freezes to ice at 0°C. If CaCl2 or another solute is added to water, the freezing point of the mixture will be lower than 0°C. This phenomenon is called a freezing point depression. It can be explained from changes in chemical potentials.

The curve between the points A and B marks compositions of solutions that are saturated with the hexahydrate, CaCl2·6H2O. 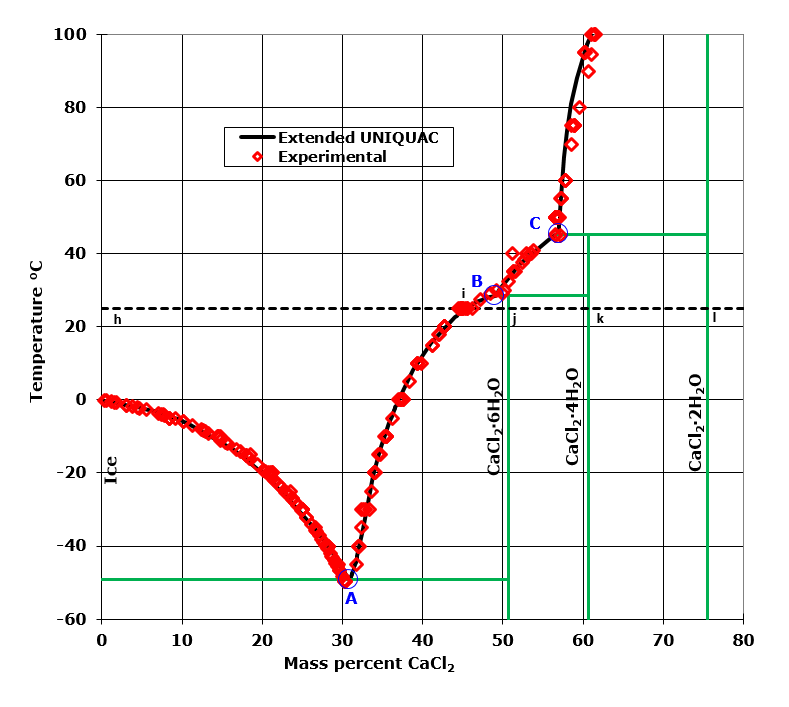 Phase diagram for the CaCl2 – H2O system. Experimental values marked with red circles are plotted together with the solubility line calculated with the Extended UNIQUAC model

The 25°C isotherm is marked with a dashed, black line in the diagram. Between h and i the mixture is liquid. No solid precipitates. Point i marks the interception between the dashed line and the solubility curve. In this point, the solution is saturated with CaCl2·6H2O, but no precipitate has formed. Between i and j, increasing amounts of hexahydrate, CaCl2·6H2O is precipitating.

The magnesium nitrate – water system exhibits a particular solubility behavior: multiple solubilities at the same temperature. This kind of behavior is encountered in many aqueous salt systems. It is annoying for the person designing processes in such systems.

Between 50 and 90°C the solubility of magnesium nitrate can be one of three values, as it appears from the phase diagram below. The figure also shows that the Extended UNIQUAC model is able to reproduce this type of solubility behavior quite accurately. Three eutectic points and one peritectic point are found in this binary system. 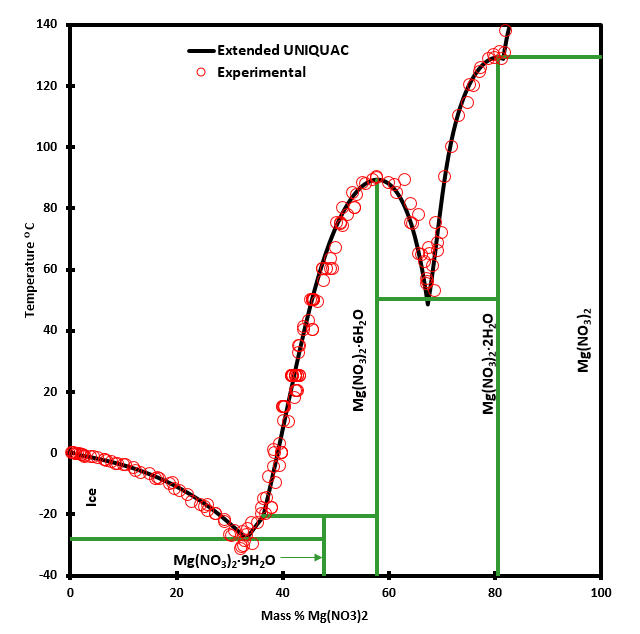 At temperatures above 73°C, the solubility of magnesium sulfate decreases with increasing temperature. This solubility behavior up to 140°C is described very well by the Extended UNIQUAC model as shown in the figure below. At higher temperatures, there is some discrepancy between model calculation and experimental data, but the decreasing trend continues.

The other solid phases marked in the phase diagram are: 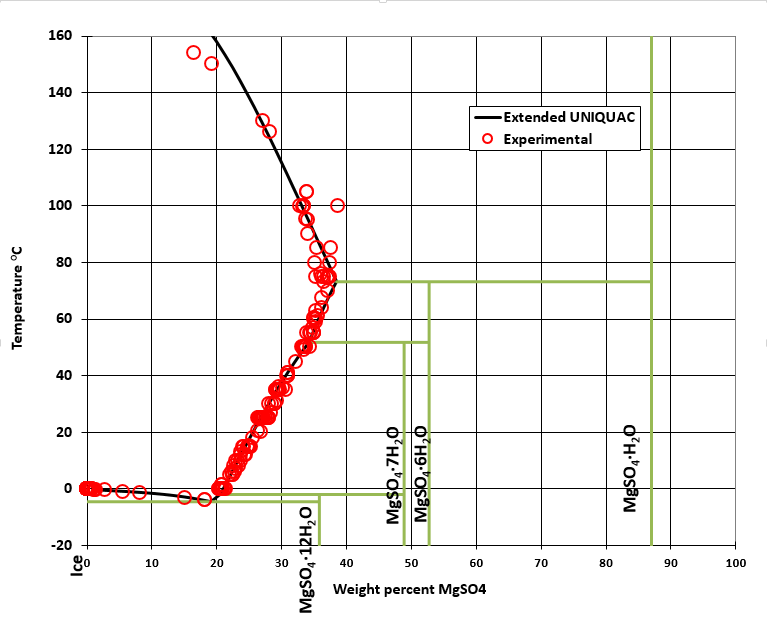 Phase diagram for the MgSO4 – H2O system. At temperatures above 73­°, the solubility of MgSO4 is decreasing. Experimental data are marked with red circles. The calculated solubility curve is marked with a black line.

In the phase diagram for the Na3PO4, trisodium phosphate – water system shown to the right, one eutectic point and four peritectic points exist. The eutectic point is the cryohydratic point, where ice and Na3PO4·12H2O both are in equilibrium with the same liquid.

In the monosodium phosphate – water system, three solid phases besides ice can be in equilibrium with saturated solutions: a dihydrate, monohydrate and the anhydrous form. The phase digram is shown at last.

The stable phases at the eutectic point are ice and monosodium phosphate, dihydrate,  NaH2PO4·2H2O.

In all three figures below, the circles mark experimental data from the open literature. Lines mark the solubility calculated with the Extended UNIQUAC model. 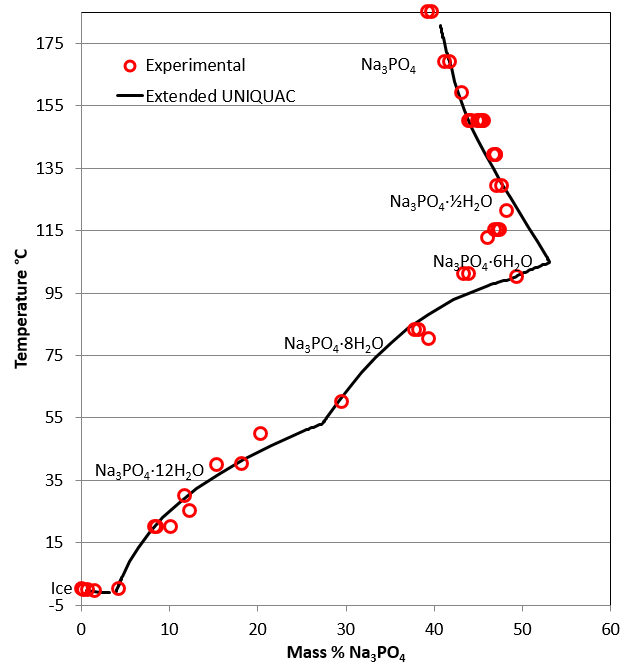 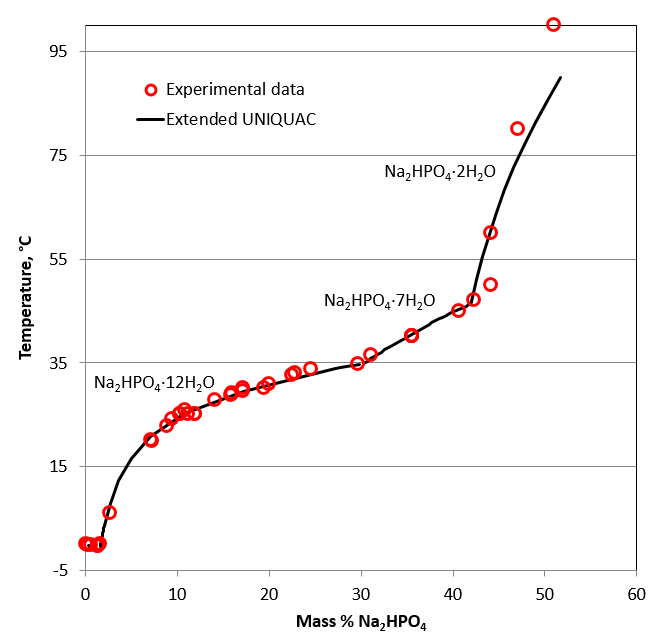 Phase diagram for the trisodium phosphate – water system. Experimental data are marked with red circles. the calculated equilibrium curve is marked with a black line. 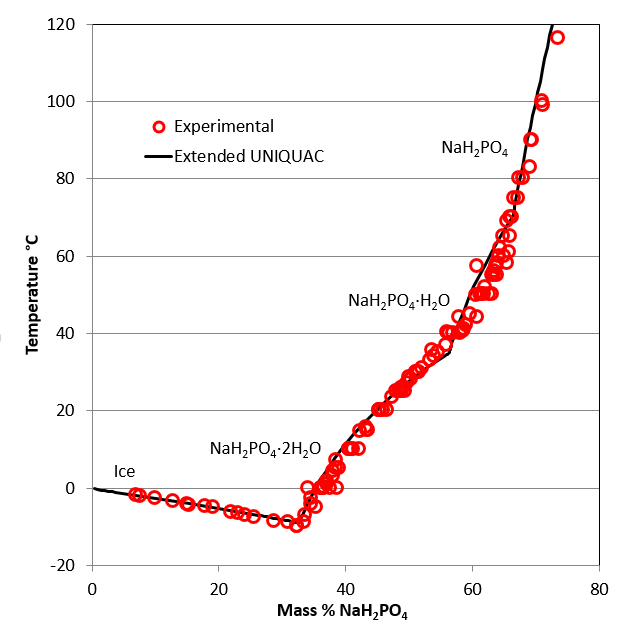