Invariant points for salt solutions are points where several salts are in equilibrium with the same solution.

According to Gibbs phase rule, a system with C chemically independent components and P phases in equilibrium has F=C-P+2 degrees of freedom. For a system consisting of one pure species the phase rule is F=3-P. If two phases are in equilibrium with each other in a one-component system, the system has one degree of freedom. The system is univariant. 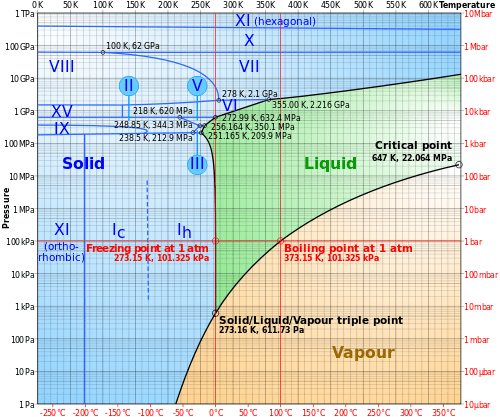 This phase diagram is from Wikipedia.

An aqueous solution of a pure salt contains three species: water, cations and anions. Still there are only two chemically independent components as the charge of the cations has to be balanced with an equivalent charge of the anions. The solution is therefore considered a binary solution, a solution of two chemically independent components. The phase rule is F=4-P for this system. An invariant point in a binary system is a point where 4 phases are in equilibrium (two salts, liquid, and vapor). In a ternary system 5 phases are in equilibrium in an invariant point.

A phase diagram isotherm for a quaternary system with a vapor phase and a liquid phase requires therefore an area to mark the concentration range in which a solid phase is in equilibrium with the other two phases. A line is needed to mark concentrations where two solid phases are in equilibrium with liquid and vapor. An isotherm for a quaternary system is therefore a three-dimensional diagram. It is customary to show this type of diagrams as Jänecke projections https://doi.org/10.1002/zaac.19060510109 .

Jänecke projections are contour plots, where the water content is shown as contours. Alternatively, as it is done on these pages, the water content can be shown as numbers (weight percent water) at grid intersections. For quaternary systems with two cations and two anions the charge fraction of each cation and each anion can be varied between zero and one. Thus the diagram becomes square. The quaternary sodium chloride – potassium sulfate – water system is an example of this. In systems with three cations and one anion or one cation and three anions, the Jänecke projection is triangular.