Solutions containing electrolytes and more than one solvent are often called “mixed solvent systems”. Mixed solvent systems containing one salt have been considered pseudo binary solutions consisting of “mixed solvent” and salt. This view makes it difficult to model “mixed solvent systems” because the standard chemical potentials of ions are functions of the solvent composition. It is necessary to know the numerical values of the standard chemical potentials of ions at the current solvent composition in order to perform solid-liquid equilibrium and liquid-liquid equilibrium calculations in such systems. With this approach, two models are actually required: one for the variation of the standard state properties with composition and another for the excess Gibbs function. The total Gibbs energy of a solution is the sum of the ideal solution Gibbs energy and the excess Gibbs energy. When the standard state properties are modified, the ideal part of the Gibbs energy changes. This change needs to be reflected in a similar change in the excess Gibbs energy also avoid discontinuities.  An example of this type of modeling is the model by Pérez-Salado Kamps, “Model for the Gibbs Excess Energy of Mixed-Solvent (Chemical-Reacting and Gas-Containing) Electrolyte Systems, Ind. & Eng. Chem. Res., 44(2005)201-225, DOI:10.1021/ie049543y.

A more straightforward method for modeling mixed solvent systems is presented here. This method makes it possible to calculate solid-liquid-equilibria, vapor-liquid equilibria, and liquid-liquid equilibria with great accuracy using the same set of parameters using the relatively simple thermodynamic model, the Extended UNIQUAC model. Some results of this type of modeling are shown below. It is based on two basic thermodynamic concepts:

This method for modeling mixed solvent electrolyte solutions was described in the following publications, which also contain the required model parameters:

The following six systems are considered on this page:

The phase diagrams below show solubility isotherms for these six systems. The solubility isotherms describe compositions of each system in equilibrium with solid potassium sulfate. In all these systems, K2SO4 is being salted out by the addition of non-electrolytes. ‘Salted out’ means that the solubility decreases and an excess of salt precipitates.

Of the six non-electrolytes added one by one in each of the six diagrams, ammonia has a stronger salting out effect on K2SO4 than the four alcohols and acetone. In all the depicted phase diagrams, the markers represent experimental data while the solubility equilibrium lines were calculated with the Extended UNIQUAC model. Notice that the temperatures vary between the diagrams.

In all the graphs below, the focus is on the lower part of the diagrams. The apex with pure K2SO4 is therefore not shown.  All compositions are in mass %. The mass percent of K2SO4 can be read on the right axis in all the diagrams

K2SO4 solubility in methanol-water mixtures. The experimental data plotted in the diagram are from

K2SO4 solubility in ethanol-water mixtures. The experimental data plotted in the diagram are from

The Extended UNIQUAC modeling of the aqueous acetone system was published in Modeling vapor-liquid-liquid-solid equilibrium for acetone-water-salt system, Pure and Applied Chemistry (2020), https://doi.org/10.1515/pac-2019-1013

The model parameters used for the calculation are those from Thomsen et al. (ref. 2). The calculation was performed with the multi-phase flash (VLLSE) routine developed by Aqueous Solutions Aps and implemented in a DLL callable from Microsoft Excel. 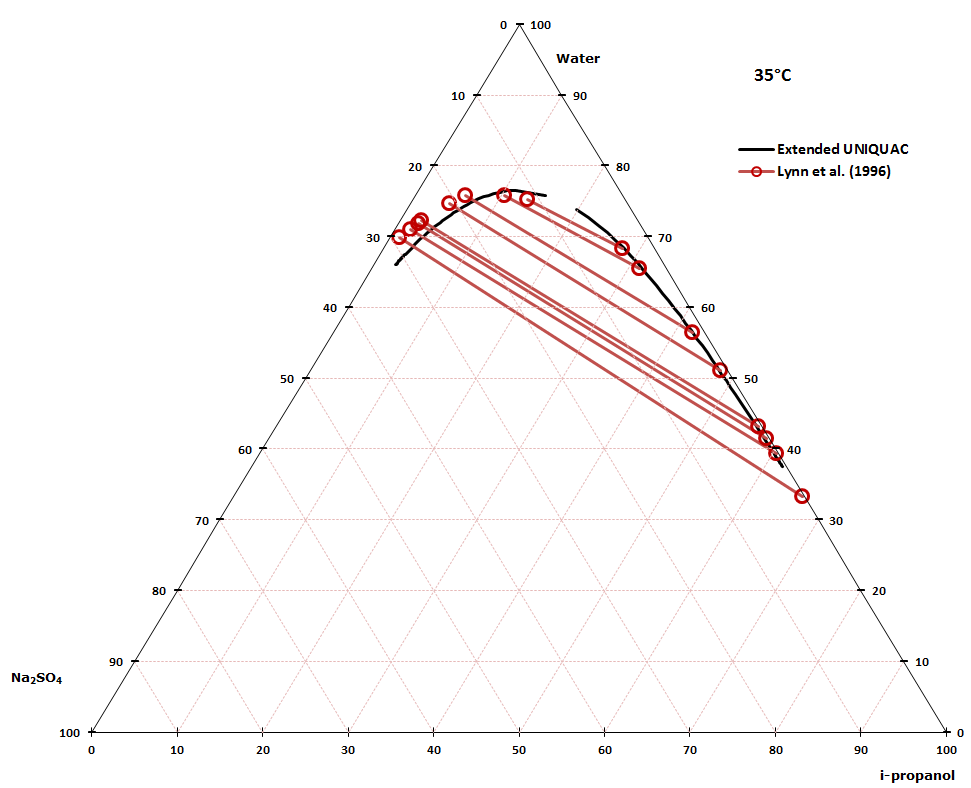